The indigenous populations of southern Africa are phenotypically, linguistically, culturally, and genetically diverse. Although many groups speak Bantu languages (having arrived in the region during an expansion of Iron-Age agriculturalists), there are a number of populations who speak diverse non-Bantu languages with heavy use of click consonants. We refer to these populations as “Khoisan“. Most of the Khoisan populations are hunter-gatherers, but some are pastoralists; the extensive linguistic and cultural diversity of the Khoisan (who live in a relatively small region around the Kalahari semi-desert) is historically puzzling.

Two hunter-gatherer (or formerly hunter-gatherer) populations in East Africa, the Hadza and Sandawe, also speak languages that also make use of click consonants. Linguists see little in common between the languages in southern Africa and Hadza, although Sandawe might be genealogically related to some of the Khoisan languages. Nevertheless, the shared use of click consonants and a foraging lifestyle led many to hypothesize that the southern African Khoisan populations are genetically related to the Hadza and Sandawe, which would imply that their ancestors were once considerably more widespread. This hypothesis has been controversial for decades. 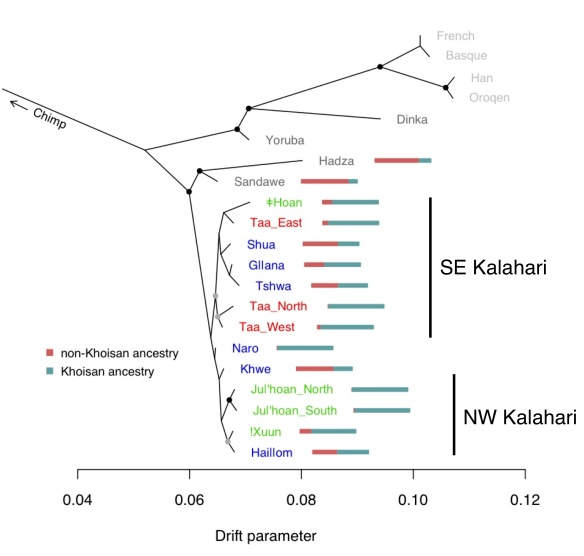 Tree relating the Khoisan-like proportion of ancestry (shown in blue in the barplot) in Khoisan, Hadza, and Sandawe after accounting for non-Khoisan admixture.

In our study, we use genetic data to address the history of the diverse groups within southern Africa and their relationship to the Hadza and Sandawe. Specifically, we genotyped individuals from 16 Khoisan populations, 5 neighboring populations that speak Bantu languages, and the Hadza (the latter thanks to Brenna Henn, Joanna Mountain, and Carlos Bustamante) on a SNP array designed for studies of human history, in that the SNP ascertainement scheme is known and includes SNPs ascertained in the Khoisan. We then merged in Hadza and Sandawe samples from a recent paper by Joseph Lachance, Sarah Tishkoff and colleagues. The main conclusions are as follows:

We’re excited about these results for a number of reasons. First of all, we’re now on our way towards understanding the history of the diverse Khoisan populations–for years these populations have been treated as genetically equivalent, but it’s clear that each population has its own complex history. Secondly, with the new statistical methods we’ve developed we were able to show not only the varying amounts of admixture that has occurred at different times in southern African populations, but were also able to peel away these layers of admixture to learn about the relationships among Khoisan populations that existed thousands of years ago. Finally, we think that these results have important implications for work using genetics to understand the geographic origin of modern humans within Africa. Though both southern and eastern Africa have been proposed as potential origins, from the tree in this post, we see no genetic evidence in favor of either; from our point of view this question remains open.

17 thoughts on “Our paper: The genetic prehistory of southern Africa”